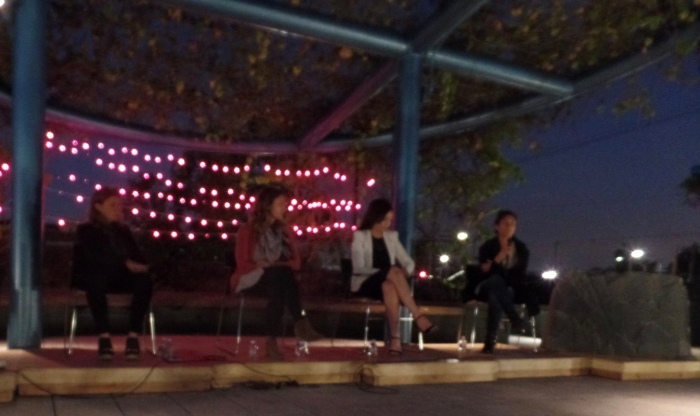 Monday evening we sat with two dozen young LA-ers on some rooftop garden deep south on Central Avenue, warming ourselves at four energetic designers. They told us how they became innovators of the urban planning proces and what they found out about a more human-centered planning process. The context of this #gardensessions is a week full of events organized by losangelesinnovates.com .

Graphic designer Colleen Corcoran, who started Cyclavia in LA, stresses the importance of failure and experiment in a fun and safe environment. A small activity with a large impact. Yes, it may cost a couple dollars to organize a Cyclavia, but it turns out these are the moments where people use public transport for the first time or start biking. New bike-lane layouts are being tested. You should, though, have a robust system of data-collecting. So, work together with the government.

Designer Jessica Bremner from Kounkuey Design Initiative advocates tactical urbanism. She considers a project successful if the community takes full ownership. In LA a long period of bad planning practices has to be rectified. Start with the people in need. Participation, independent of scale, is the clue. People know very well what is going on; it is already an issue in the community before it trickles down into government.

Architect Elisabeth Timme from LA-Más mentions her drive to address different scales of engagement. She promotes the tactical urbanism and the experiment as one strain, but working at the systemic level as an other strain, like reviewing the methode of zoning plans in LA (Recode LA), an imperative to allow densification.

Designer Bora Shin represents the design-lead in the Innovation team of the Los Angeles Mayors office. She stresses the importance of design at leadership level. She sees how managing community design practice is getting better implemented in the governmental planning proces.

Keyword of the evening turns out to be fluidity. Fluidity in ownership, fluidity between the city and designteams like these, fluidity between scales and not in the least fluidity in plan: Elisabeth lobbies for an alternative timeline that doesn’t show the end but is the beginning of an discussion.

Yes, social inequity, resource-scarcity and rapid change are themes LA is dealing with, but all women convey a comforting trust in the process as long as the people who are at stake are seriously involved.

Leaving the rooftop, 5 guys in green shiny T-shirts with gold prints wished me a safe bike-ride home. When I asked about their shirts, they proudly stated to guard Central Avenue as “The Historical Jazz District,” explaining how this street is going to revive, like it used to be, long before they were born.

View all posts by patriciabijvoet